The new Phenom 300E was officially launched in October 2017 and has just been delivered to its owner – in remarkably short turnaround for a first delivery.

The owner has been identified as South African businessman John McCormick, who had previously owned a Phenom 300.

Phenom 300E was introduced at NBAA 2017, and this is what Michael Amalfitano, President and CEO, Embraer Executive Jets said about it:

“We are very excited to introduce the Phenom 300E which sets a new standard in value and customer experience. The Phenom 300E reflects our commitment to fascinate our customers. With a passion for excellence, our team has been working closely with customers to bring to market yet another beautifully designed and brilliantly engineered marvel of aviation.”

New and improved Phenom 300E private jet is the next step in the evolution of Embraer best-selling business jet for the past four years.

“People ask, ‘Why do anything to the best-selling business jet,’ “said Amalfitano. “Because we can—we have the opportunity to enhance the platform”.

And according to Embraer, the “E” stands for “enhanced.” 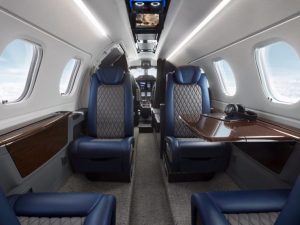 The cabin enhancements include more spacious, efficiently designed cabin and even wider selection of personalization options.

The table, side ledge, side wall and valence designs are also new, while the cabin is actually more spacious, with a three-inch wider aisle and an additional inch of headroom.

There is an upper technology panel incorporated along the centerline of the cabin ceiling, significantly improving passenger ergonomics. The panel offers control of everything – from the lighting system with a broad range of ambient mood selections, and patented flush air nozzles to flight information with the touch of a finger. Two seven-inch displays swing down from the ceiling to offer in-flight entertainment, with audio and video on demand or passengers can simply use their Bluetooth devices.

Much of the technology remains hidden, discreetly tucked into side ledges, for example, keeping the interior sleek and stylish, a design signature of Jay Beever, the company’s v-p, interior design, and architect of Embraer’s so-called “future proof” cabins.

Depending on the interior configuration, the jet can seat 6 to 10 people.

Phenom 300E has essentially the same stats as its predecessor. It’s still powered by the same twin Pratt & Whitney PW 535-E engines and has the same maximum cruising speed 521 mph and range about 2,270 miles with six passengers and a maximum cabin altitude of 6,600 feet.

Base price is $9.45 million USD but depending on customization it can reach $10 million.